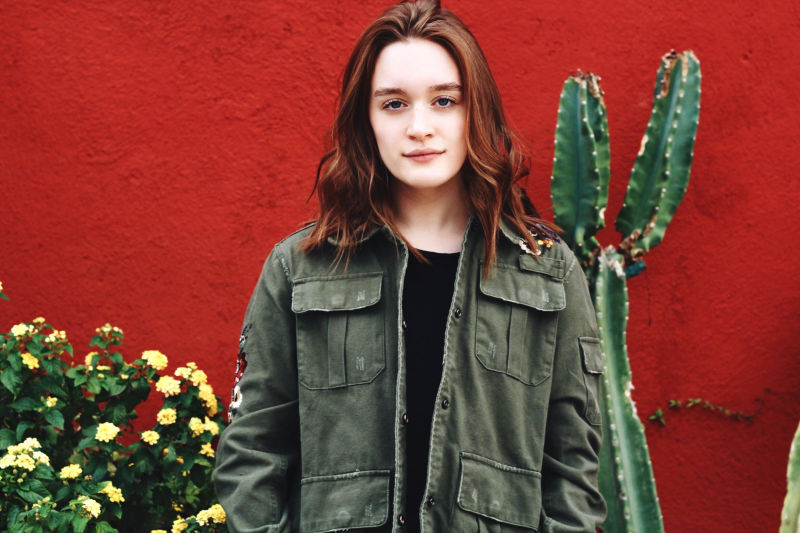 “Miracles don’t always make faith. Tangible proofs don’t guarantee trust. Suffering, loss, difficulty, questions, wrestling and the oceanic grace and unflinching presence of God do. And, perhaps, the fact that grace and nearness show up in those kinds of places is, in spite of us, the real miracle. Then as St. Augustine said, ‘If we but turn to God, that itself is a gift of God.'”-Michele Cushatt, Relentless: The Unshakeable Presence of A God Who Never Leaves

I read somewhere recently the age of seventeen is a critical stage in a person’s development. It’s the time when a child begins to tell their unique narrative differently than their parent’s might. We craft our kid’s stories for them much of their childhood. At some point they claim what is fundamentally true and retell the rest.

I hear my voice saying it hundreds of time over the past ten years. After learning of Danica’s diagnosis and my own people would always ask, “What about your older daughter?” I always answered, “Delaney is the healthy one. She got her dad’s genes.”

I got Delaney’s story wrong.

I look back now and see clearly when her symptoms began. About two years ago she started complaining of little things. Her perfect vision drastically changed. She would talk about pressure during big weather events. The base of her skull hurt. She would mention vertigo. She felt like blacking out when she changed positions. She was either burning up or freezing cold. During the early months of these sporadic issues I was having four shunt surgeries at Hershey Medical Center in Pennsylvania. I was planning the first Option EDS retreat, and we were praying about moving to Tucson. I wasn’t ignoring her. But I did explain some of the things away or asked her to keep track of how often she felt them and how severe they were. Our family lived focusing on the biggest fire burning at any given time so her little blaze grew just out of sight.

Once we settled in Tucson and her symptoms increased I took Delaney to a general practitioner and we received referrals to a cardiologist and geneticist. In July she was diagnosed with Dysautonomia and POTS, Postural Orthostatic Tachycardia Syndrome, and began a cardiac and an adrenal medication. The wait to see the geneticist was seven months.

Delaney’s symptoms escalated in the past sixty days. She would wake up and feel like she couldn’t make it to school. She would push through but come home and collapse in bed. She asked to wear my Aspen collar to support her head and neck. In certain positions her face would begin to tremble and go numb. There was a growing, painful soft spot in the back of her skull. I’d never felt anything like it, and I couldn’t find any medical literature describing it.

Her genetics appointment was last Thursday. We went knowing she would be clinically evaluated for Ehlers Danlos Syndrome and would also do some specific gene testing which takes about a month to get back. The geneticist felt the skull opening during her exam and was visibly alarmed. The appointment changed into a rush to have X-rays and blood work and urgent orders for an upright brain and cervical spine MRI. We drove the two hours to Phoenix on Monday for imaging. I didn’t bring up the scans until Tuesday night. Dear God. I couldn’t breathe. There is a visible opening to her brain in the back of her skull illustrated by the strange sketches of black and white on the screen.

Because the MRIs were ordered by a geneticist we technically had no one to consult about the results. Wednesday morning I sent a text to Danica’s Johns Hopkins neurosurgeon with a screen shot from the scan. He called me immediately. Before moving to Hopkins he was at Barrows Neurological Institute in Phoenix. I prayed he would have a suggestion of someone to see at least initially here in Arizona. Delaney has an appointment with a neurosurgeon at Phoenix Children’s Tuesday afternoon.

I cannot write about the multitude of emotions each of us are facing. I don’t have the luxury of laying those out right now. My fierce mother instinct and all my neurosurgical knowledge and experience has been preparing me for something I never imagined I would have to do. My fight or flight over the past week has depleted every bit of cortisol. I sat in the Target parking lot yesterday afternoon and sobbed. I texted Dan. “I’m so tired. Exhausted. Emotional. I feel like I can’t safely drive home.” The very real need to physically do each next thing trumps the feelings.

This is the update. Oh how we need your prayers. Much like when I blogged through Danica’s journey I will plan to update here so please subscribe if you would like to follow. It’s difficult to return texts, voicemails and emails. That doesn’t mean they don’t mean so very much. This is a lonely road. Our tangible needs are very real. I will also share those here when we get our bearings. We will need your help.

Please pray for Delaney. It’s her final semester of high school. She is registered at Arizona State University Herberger Institute of Design and the Arts to study Interior Design in the fall. She’s been working on the Tucson Museum of Art’s Teen Council. She’s in an achingly beautiful part of her life where almost everything seems possible and suddenly so much harder. Our narrative for her has always been one of God writing all her days. She’s seen lament and praise, suffering and joy, and need and plenty in a thousand ways. But what does she believe when road testing all these things for herself?

We talked about miracles this week. Someone well meaning already threw the word out there in a faith context that made me cringe. We’ve seen miracles. We expect miracles. But not in the waking up and the skull is perfectly healed kind of way. Not because we don’t think God is able, but because we know this is not the way faith works.

I’ve been reading through Michele Cushatt’s ‘Relentless’ for the second time. In a chapter about God being with us in our doubt she writes:

“Perhaps it’s time to revisit the miracles and evidences we’ve already seen. He has doggedly pursued us in spite of our every attempt to push Him out. His presence is big enough to enter into dark places, confusing places, ugly and beyond-understanding places and, by the sheer magnitude of his mystery, shine a light far too bright to be eclipsed by our doubt.

If I dare trust Him even here, doubt turns out to be a gift. A strange, hard gift, to be sure. But the means of a deeper faith. And if faith grows in a darkness with every sinister attempt to ruin it, then perhaps that is the real miracle after all.”

I’ve found Laney leaning into God this week. She’s turned up the music that speaks truth. She’s practicing the spiritual disciplines that often lead us out of the dark of doubt into the light of faith. This is her story. I asked her what song is meaning the most to her right now and she shared this. I’d never heard it before, and it’s left me with my eyes pointed to Christ. How can I thank Him? For even this? Because it’s ALL GRACE.

8 Comments on Team Delaney. How Can I?