“I have called to God and heard no answer,
I have seen the thick curtain drop, and sunlight die;
My voice has echoed back, a foolish voice,
The prayer restored intact to its silly source.
I have walked in darkness, He hung in it.
In all of my mines of night, He was there first;
In whatever dead tunnel I am lost, He finds me.
My God, my God, why hast thou forsaken me?
From His perfect darkness a voice says, I have not.”–Chad Walsh 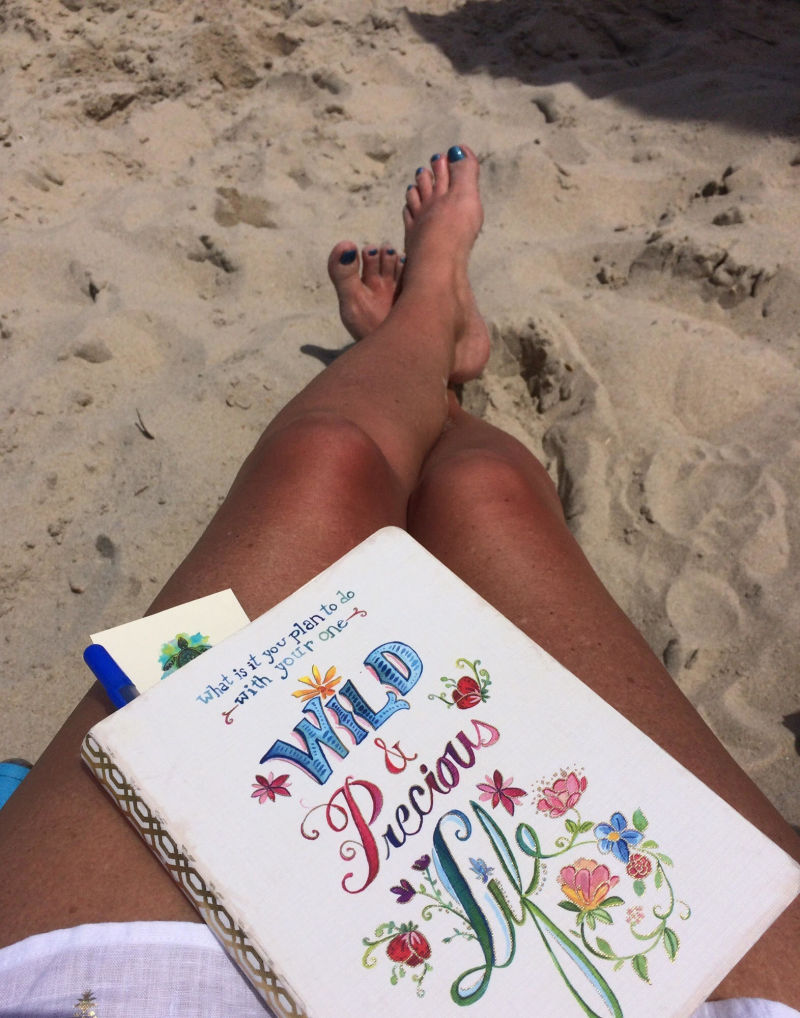 Two weeks ago I sat on the North Carolina coast with the sun in my face, the clean ocean air filling my head and my heart and my bare feet grounded in the sand. I was without pain. It was the perfect and oh so rare cocktail of environment, weather and wellness gifted to me a few days during our family vacation. I didn’t take a minute for granted. I scribbled in my journal all the beautiful things that flow from the kind of hope born in pure light. Mary Oliver’s words echoed in the ebb and flow of the waves, “What is it you plan to do with your one wild and precious life?”

This is day seven of unspeakable suffering I don’t understand.

In the fall of 2013 I had my very first lumbar peritoneal shunt placed after several years of struggling with Intracranial Hypertension. Of all my pain, the brain pressure puts me in bed, holding my head, weeping and even wanting to die. I lose vision in my right eye and hearing in my right ear. On the worst days I am completely debilitated. I knew that shunts, both lumbar and ventricle, are not engineered well and are especially problematic in EDS patients, but I was desperate. The first LP shunt clogged quickly, and I had a revision in February, 2014.  A week after surgery I flew to Arizona to heal. I arrived being pushed in a wheelchair with a large wound just under my ribs where the device was replaced and incisions in my side and back where the tubing snaked around into my spinal cord. I left having hiked over a mile the last day there. It was the most well I’d felt since 2007.

Since, I’ve had another LP shunt revision and a VP shunt placed in my brain that needed revised last April. The brutal Ohio months of January and February were always a catalyst for failure. Escaping to Tucson became a way for me to get relief. Because of planning and executing my first Option EDS – the retreat in May I didn’t plan on traveling west this year, but my tell-tale symptoms of a clogged device escalated. Delaney and I took a last minute, emergency trip in February. My relief was instant. On the flight home we both wept.

The following weeks of drastic weather changes battered my brain. I was more scared than I’ve ever been. My vascular neurosurgeon moved from Virginia to Pennsylvania since my revision last spring. I reached out, and he had me come immediately. March 22nd Dan and I drove five hours to Hershey Medical Center. I was admitted through the ER, and he revised my shunt late that night. The device and tubing were clogged. The next morning Dan asked him how long he thought this one would last. He said maybe a year at best and next time he would have to place a shunt on the left side of my brain instead of the right. It’s too much cutting.  It’s stenosis in the arteries and ventricles. It’s trauma that cannot be healed anymore.  I’ve had six shunts in four years, and there is no real fix in sight.

With thirty staples in my head I returned to Tucson with my dear friend Janet. It was another unplanned trip. I spent my time there seriously considering what I’ve known I need to do to save my life. I looked at schools for the girls. I looked at real estate. I spent the few days imagining what moving there would look like.

Several weeks later, in early May, my family and I and my parents traveled to Tucson together. The girls visited their possible schools and shadowed students that may become their friends. We looked at short and long term housing options. We spent time exploring what we’ve known we have to do to save my life. We put an application in on an apartment even though we felt the multi-family environment may be unstable for my mast cell disorder. We took a step in faith.

The day before we left I received my insurance EOB for my most recent shunt revision surgery at Hershey. The cost is shocking. $145,566.16.

We flew back into Cleveland on Sunday afternoon. A pressure system was bringing rain. I literally walked off the plane to an escalating headache. I cried. I sat on the baggage carousel and cried.

In all the preparation for the retreat I also began to ready our home for sale. It’s complicated because this house is in my parent’s name. It was…is a miracle, and we are deeply rooted in these literal four walls. Dan began sending his resume to job opportunities in Tucson. I wanted to ask you all to pray, but I didn’t want to distract from the important work of the retreat. Dan had a Skype interview the Monday of the retreat week. It didn’t go well. He was distraught. I was not here. He became afraid. The girls were absorbing the weight of his emotions. I was experiencing the untold beauty of a calling fulfilled. It was exhausting and exhilarating. I flew home to a storm of doubt and backtracking. The expectation of a plan to relocate so quickly was not easy for Dan. He is a man of faithful doing. He has not hustled or sold himself even once during the last ten years. He’s sacrificed any personal ambition to care for our family. I did not fully realize the kind of inadequacy he was feeling about a job search. The girls and I met and prayed. We had a family meeting and removed the “deadline” date of the beginning of school in early August. I watched my husband reappear just a little. We leaned into our family beach vacation. While sitting on the beach I wrote an email canceling our lease which was to begin June 15th.

We flew back into Cleveland in pouring rain. My head felt like it would explode. It’s been hurting since. The past week has been a testing of everything I’ve said about not cutting my brain open again. I’ve tried every possible treatment. I went to the ER Saturday and asked for IV meds which only took an edge off the constant debilitating pressure. I’ve hid in my cool, dark room and cried out to my God. I’ve been in touch with my neurosurgeon who suggests a large volume lumbar puncture to remove fluid and provide some relief and also give information about a shunt failure. I would have to travel to Pennsylvania for this. I believe I am not supposed to have another surgery.

I received an email from the realtor in Tucson last night. The community we would love to live in is releasing their first lots. There is an opportunity to build a small home with a suite where family could stay or we could host EDS warriors who need to know there is a place they could heal and feel more well. This has been a dream of mine since I began traveling to Tucson. The retreat only reinforced this desire to minister to others in such an intimate and life changing way. In my desperation I wanted to delete the email. I couldn’t even get out of bed. How in the world would we ever make it to Tucson now?

I had a Toradol injection yesterday and began a medication that has helped in the past when my shunt has failed. I am trying to write this clunky post while I can.

My life doesn’t seem wild or precious at all. The long hours curled up in the dark feel like wasted time. What are my days worth?

I spent time with a wise counselor this morning. She has walked every step of this journey with my family and I for so many years. She’s seen the medical costs that could have bought a half dozen homes. She’s seen me heal and even blossom on trips to Arizona and regress when I return. She knows my complete devotion to and admiration for the man who has loved and served my family and I through a decade of doing the faithful and sacrificial next thing. She championed the purpose that grew from my pain and became Option EDS – the retreat. She understands this particular hurt is the one kind of suffering that brings me to the utter end of myself and makes me want to disappear. She believes I am supposed to stay. Today she reminded me of what’s been possible, because we’ve been vulnerable enough to admit we could never do this on our own and then humbly ASKED. This has been no easy thing. Especially for my Dan.

You all have been invested in our story from the very first blog post on Team Danica. You’ve prayed and encouraged and supported and loved us into miracles. This is big. We are ever grateful. I cannot even begin to imagine how God will do this new thing. But I’m asking you to pray. Plead with us for a way in the wilderness. I want the story to have some kind of restoration, celebration, land of milk and honey resolution here in this life.  It may not come.  But the changing of our hearts day by day and the healing of our eyes to really see Him and know Him is preparation for the eventual total healing of my body and our souls forever and ever.  This is Grace.  Our Hope is built on nothing less.

In my crying out today I echo the voice of the one who endured the ultimate suffering for me. We share the same Father who has a perfect plan for our good and His glory.

I feel forsaken. I am not.

I believe. Help my unbelief.

“For from Him and through Him and for Him are all things. To Him be the glory forever! Amen.”–Romans 11:36