“Wishes of one’s old life wither and shrivel like old leaves if they are not replaced with new wishes when the world changes. And the world always changes. Wishes get slimy, and their colors fade, and soon they are just mud, like all the rest of the mud, and not wishes at all, but regrets. The trouble is, not everyone can tell when they ought to launder their wishes. Even when one finds oneself in Fairyland and not at home at all, it is not always so easy to remember to catch the world in it’s changing and change with it.” ― Catherynne M. Valente, The Girl Who Circumnavigated Fairyland in a Ship of Her Own Making

It’s a sunny New Year’s Day morning. Each of us woke on our own time frame. This is always gift. My “nest” chair is back by the window after taking down the Christmas tree and decorations yesterday. I am snuggled under my quilt with Twixie at my side, and my prince brought me a cup of coffee perfectly made the way I like it. After breakfast our family gathered around in the living room to begin the new year in our fifth year of making wishes.

Someone gave our family a beautiful silver ornament in December, 2010. It is engraved with the word “WISHES.” It hangs on a bright red grosgrain ribbon and opens to the words “DO COME TRUE.”

It was given to us in a year we had trouble imagining anything other than the hard day we were living. I had a difficult hysterectomy followed five weeks later by Danica’s second brain decompression and fusion. Danica was in a body brace and a wheelchair when we were finally allowed to leave the hospital. I had to quit my job doing database work for a company in DC to care for her 24/7. I made more money than Dan. My job was essential to our survival. We lived at my parent’s house the first month we returned from Cincinnati. Finally, we made the decision to return to our home for the holidays despite the challenges the stairs presented. During my hysterectomy my doctor found my colon infiltrated by endometriosis. He closed me up but told me I needed to see a surgeon at Cleveland Clinic. Instead of finding any relief from the first surgery my personal pain formed a crescendo compounded by the burden of lifting Danica in and out of her wheelchair and carrying her up and down our steep stairs. This was the first year we began to taste YOUR love for us. We were only able to go home for the next six months because of the support of many who knew our entire family could not begin healing without some months alone in our own space. We were able to stay until May, 2011.

We had been promised a Disney wish trip for our Danica sometime when she was well enough. New Year’s Day, 2011 we couldn’t fathom this happening. Four long months later Danica was given a release from her little body cage and her chair, and we planned our trip. Four weeks after my colon resection I was traipsing around Orlando trying to smile and keep the wish looking like a dream come true.

This ornament has become a family tradition. It is very special to look back at the one thing we hoped for in the coming year. We write our wish on a little strip of white paper with the year. The girl’s wishes have mostly been childlike. Two years in a row Delaney wished for a puppy. This finally came true! Danica’s wishes began like a three year old’s would. She wanted to meet the Disney princesses, and she did. Last year Delaney’s wish was also material as I would imagine an 11 year old’s would be. She wanted a cell phone. Danica’s took me off guard. She wished “for mommy to get better.” Every single year Dan and I have wished for the same thing. We want healing. Over and over again we’ve hoped for a year with less days hurting and more days living. 2014 was definitely a year of this.

We don’t share our new wishes with one another until New Year’s Day next year. My wish this morning was something completely different than healing, and I feel confident the rest of my family made laundered wishes too. Something has shifted in us all. We are changing and being changed. We are growing in faith and wanting first things. We are less cynical and more expectant. We have seen the goodness of God shine through every darkness. We have hope that is so much more than a wish. It is rooted in a belief God wants to bless us. He wants us to know Him more. He wants us to trust Him more. He wants us to praise Him more.

Bleached white wishes because of Jesus. 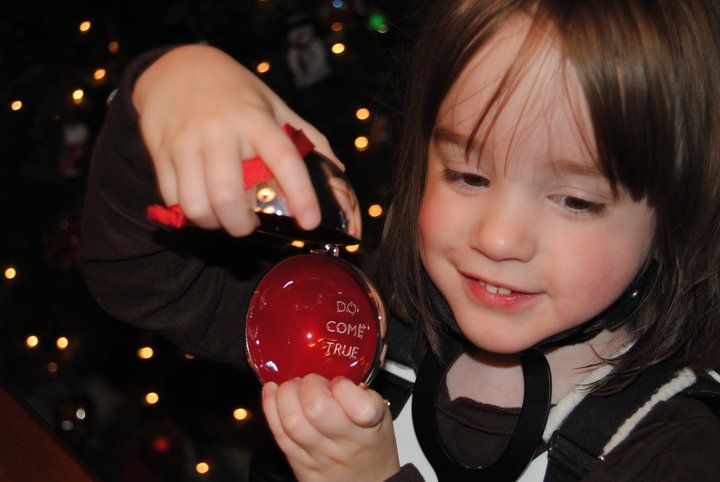